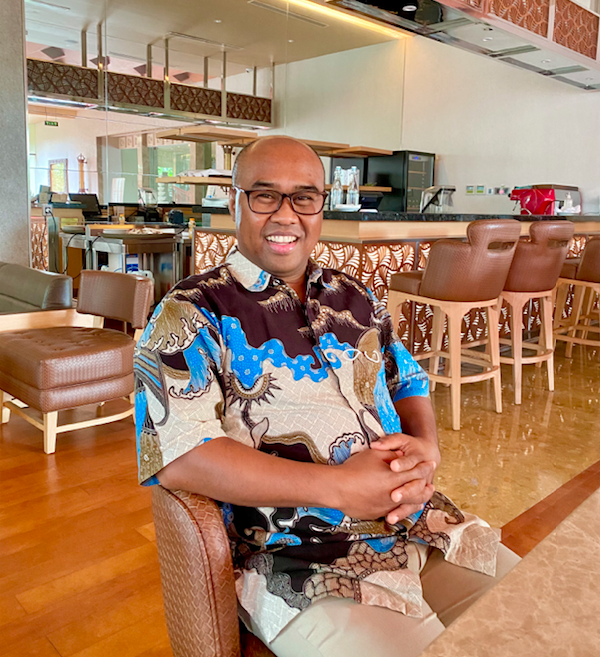 How did your career in hospitality start? The education, internship, or your ever first experience/job in the hospitality industry

After I graduated from the high school in Surabaya in 1993, I continued by education to a small hotel school in Surabaya.  In between the college, I started my career as a dishwasher when I was 19 years old at the 4-star Hotel in Prigen named Surya Hotel and Cottage as an internship trainee.  Afterwards, I decided to take the chance to be a Room Service waiter as well as a Banquet waiter as a part-timer, where I handled mostly wedding banquet events.

Tell us your career journey until you made it this far, is working as a hotelier your dream career?

After Surya Hotel and Cottage, I decided to try my luck at the Hyatt Regency in Surabaya as a part-timer where I worked as a laundry attendant, and then later as a housekeeping attendant where I worked as a Room attendant.  After few months, I decided to apply for an internship trainee at the Surabaya Hilton International as a Bellman in Front Office Department.  I felt lucky that I was accepted and after 3 months, I was offered an employment contract for 2 years.  I spent my tenure at the Surabaya Hilton International for more than 6 years, and my last position was an Assistant Manager of Front Office.

In 2000, I moved to Shangri-la Surabaya as a Service Manager of Front Office (equals to a Duty Manager position) when I was 25 years old.  I worked for Shangri-la for about 3.5 years and subsequently, in 2003, I decided to move to JW Marriott Surabaya where I was accepted as Assistant Front Office Manager when I was 29 years old, and promoted to become a Front Office Manager a year later.  I took a big step by resigning from JW Marriott Surabaya after 5.5 years, when my last position was Revenue Manager and accepted the offer to be a Director of Revenue Management at the Ayodya Resort Bali (formerly known as Bali Hilton International) in 2008.

Every hotelier has a big dream to work in the Island of Paradise therefore, I spent my tenure for 3 years at this big resort and had two roles as Director of Revenue Management and Director of Rooms.  Hotel is my dream career since I was in high school and worked tremendously hard to get to the top of my career as a hotelier.  After 3 years at the Ayodya Resort Bali, I decided to take a challenge to become an Executive Assistant Manager (EAM) at the Novotel Bali Benoa (Accor Group) at age of 36 years old.  I was there for a short period of time of 18 months before I decided to take a big step to be a General Manager of a newly developed hotel brand of SenS Hotels & Resorts from which the Chairman of the company would like to build a hotel in Ubud.

I was hired as a General Manager since early 2013, when I was 38 years old and helped the owner construct the hotel from scratch.  SenS Hotel Ubud was successfully opened in 2015, subsequently I helped the owner to build a 5-star resort in Ubud named SereS Springs in Singakerta from scratch and opened in 2017.  After two successful period of building and opening the two properties, I am now a Regional Director of Operations for both hotels.  I have been with this company for almost 9 years and will continue so.

Since when do you work as a hotelier in Bali or are you moving around the world?

Before I came to Bali in 2008 for the first time in my career, I was lucky that I have had a great opportunity to groom and develop my career in some international chain hotels.  When I was at the JW Marriott Surabaya, I was challenged by my General Manager to be in-charged as a Revenue Manager from which I helped the management to perform better in terms of increasing Average Daily Rate, effective rooms inventory management and better yield strategy.

Providing a good data standard and forecast in order to help the management make the best business decision accordingly.  I had an opportunity to explore more knowledge in Revenue Management Strategy in Tianjin & Beijing, China.  I also had been crossed exposure to some properties in Asia Pacific such as JW Marriott Hong Kong, JW Marriott Bangkok, JW Marriott Phuket, JW Marriott Kuala Lumpur, JW Marriott Singapore by the assignment from the Regional Office of Marriott International in Hong Kong.

As far as your career path, what lessons do you hold on to?

I learned from many mentors and I was lucky being trained and taught by great leaders during my career path.  My idealism more or less was adopted from many of my mentors.  Being a leader, the most important lessons I have learned are the following:

In your opinion, how is the travel industry shifting back years ago then now? Especially in the recent situation related to the Covid-19?

Post-pandemic, travel industry definitely will be shifted.  People will be more concern about hygiene, sanitation and cleanliness as well as other health measure that will take place.  Digitalization of hotels’ service amenity will take place in no time.  In example, the restaurant menu will no longer being hard printed, it will be in digital instead.  Therefore, hotel industry must be ready for that new expectation so that we must create new habits.  In Bali, if the Central Government open the border for international travelers, let say in February 2022, the tourism will take at least 12 months to recover to back to the level like where we were in 2019.

In 2002, did you already become a hotelier? Anyway, we always curious, when … you know, ‘the bomb’ is hits Bali so hard, when we’re you at your career at those time? Can you tell us how the Bali situation is compared with the present situation?

When the first bomb attack Bali in 2002, I was still working at the Shangri-la Surabaya as a Service Manager.  Whereas in the second one in 2005, I was at JW Marriott Surabaya.  I put my full attention on the situation after the bombing took place.  I recognized that the tourism recovery took place within 6-12 months.  I think, the recovery took quicker than 12 months which indicated that Bali as the best tourist’s destination has very strong market positioning and branding.  It is very different with the pandemic situation nowadays, however I am very optimistic that Bali will be able to recover within a period of 12 months (at the latest) after the border opens.