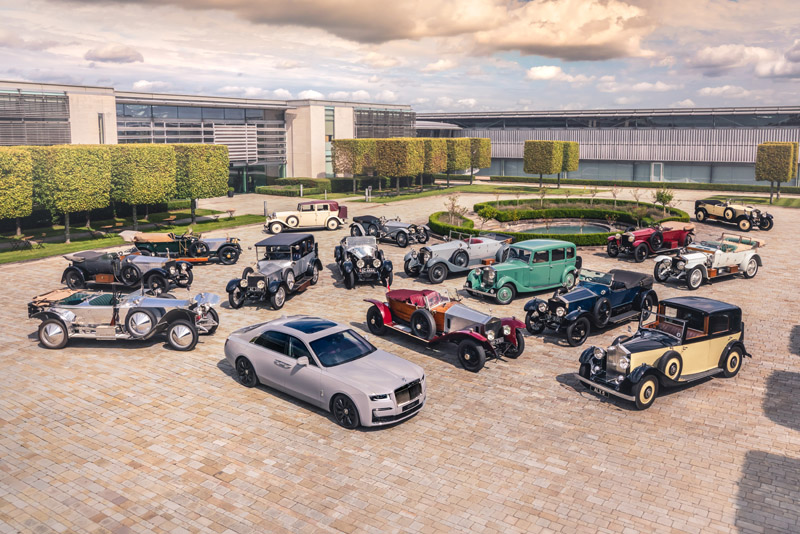 •           Members of the world’s oldest Rolls-Royce car club attend exclusive gathering at the Home of Rolls-Royce, Goodwood on Friday 4 September 2020

A magnificent line-up of 20 vintage Rolls-Royce motor cars provided a memorable spectacle at the Home of Rolls-Royce on Friday 4 September 2020.

The visit formed part of an exclusive event for members of the 20-Ghost Club, the world’s oldest Rolls-Royce car club, which is devoted solely to pre-1940 Rolls-Royce motor cars. The motor cars travelled to The Home of Rolls-Royce under their own power: of all the Rolls‑Royces produced since the marque’s foundation in 1904, almost three-quarters are still in perfect working order today. Models present included Rolls-Royce 20/25, Silver Ghost, Phantom I and Phantom II, the oldest being built in 1911.

Guests enjoyed a socially-distanced picnic lunch from specially-prepared hampers. As well as Champagne, each hamper included a jar of Rolls-Royce honey, a rare and precious commodity produced by the now-famous colony of 250,000 English honeybees that reside in the Goodwood Apiary.

Guests were also treated to a private viewing of the latest Rolls-Royce to bear the storied Ghost name, just three days after its global launch. Five years in development, new Ghost is the most technologically advanced Rolls-Royce ever created and a worthy successor to the previous model, which became the best-selling car in the company’s history. Built on the marque’s proprietary Architecture of Luxury aluminium spaceframe, new Ghost boasts a new, more powerful 6.75-litre V12 engine and enhanced driver aids, with more than 100kg (220lb) of internal acoustic damping materials eliminating all extraneous noise.

It was particularly special event for one car, as it celebrated its 100th birthday. Built in September 1920, the Silver Ghost has an open drive Limousine Body by HJ Mulliner, finished in silver and black. The car was acquired by its present owners in 2011 and has completed over 17,000 miles since then, mainly on 20-Ghost Club tours.

Andrew Ball, Head of Heritage, Rolls-Royce Motor Cars, said, “It is always a delight to welcome the 20-Ghost Club to our Home here at Goodwood. As the oldest Rolls-Royce car club in existence, they’re a very special part of the wider Rolls-Royce family and play a crucial role in maintaining our unique heritage. It was the Silver Ghost that first earned Rolls-Royce the accolade of ‘the best car in the world’ – and with new Ghost, we’re upholding and strengthening that reputation. When you see the earliest and latest models together you realise just how far advanced the original cars were, in terms of design technology and bespoke capabilities. Our new Ghost remains true to the original car’s founding principles of effortlessness, excellence and serenity.”