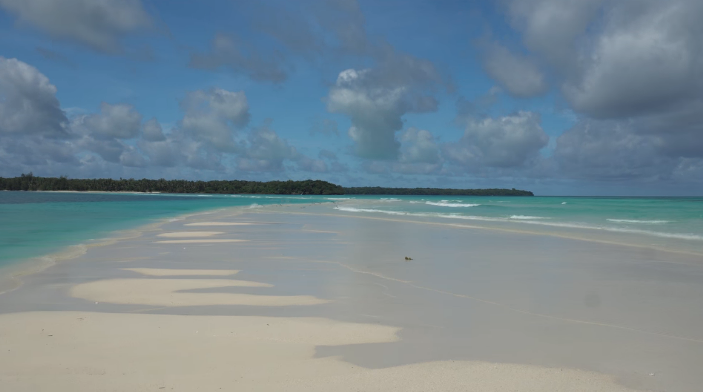 9 Most Beautiful Beach in The World

Maluku Province is well-known for many nature beauties. One of them is Ngurtafur Beach in Warbal Island, South-East Maluku Regency. This beach has a quite exotic of nature beauty. This beach has a distinction, that is white sand beach spreads out from Warbal Island to the sea for two kilometers along and seven meters wide. So if you are standing here on this sand beach you will find that here it seems like two beaches on your both sides. This beach also has crystal clear sea water which possible for you to see coral reefs beneath the water. That makes Ngurtafur Beach becomes a perfect place for swimming or snorkeling.
Not many people knowing Ngurtafur Beach. The best time to visit this beach is on April-May and October-December in every year. This is due to good weather and calm waves are most available on those months

A long, thin stretch of perfect sand and clear water in a thousand shades of blue make this one of the Caribbean’s top beaches. Since it’s accessed only by parking in one of 21 tiny turn-offs along a bumpy, unpaved road in the middle of the island’s western National Wildlife Refuge (formerly off-limits as a U.S. Navy training base), getting there is part of the adventure. Snorkel on your own around a small cay, or book a trip with one of the island’s operators for a trip to its secret underwater spots.

What sets Tulum apart is the proximity to some of the most stunning Mayan ruins in all of Mexico: it is here that one of the world’s best cultural destinations meets one of the world’s best beaches. Tulum’s ruin is an ancient walled city sitting on rocky cliff that overlooks a stretch of beautiful beach. With hordes of tourists visiting every day, the area is not exactly private, but the broad white-sand beach and mesmerizing turquoise Caribbean waters more than make up for it.

Navagio beach is an isolated yet strikingly beautiful sandy cove on the Greek island of Zakynthos. It is often referred to as the Shipwreck Beach because it is home to the wreck of a ship called Panagiotis that is believed to have been a smugglers ship.The area is defined by its sheer limestone cliffs, white sand beaches, and clear blue water, which attract thousands of tourists yearly. The strip of beach is accessed only by boat, but you can see it from above if you stand on the high side of the cliffs that overlook it.

Hardly lacking in gorgeous beaches, the Philippines claims a pink-sand variety, too. The blush color comes from billions of pieces of crushed red organ-pipe coral, seen in every handful of sand. The number of visitors to the island is regulated, and advance arrangements should be made through the tourist office in Zamboanga.

Only accessible by boat or helicopter, Whitehaven Beach is set on the largest of the 74 Whitsunday Islands and it is surely one of the most beautiful beaches on the planet. The entire island is a natural preserve, featuring some of the purest sand on earth, crystal clear waters and access to the Great Barrier Reef. Not only is it tough to get there, but there are no restaurants, bars or hotels, so you’ll need to plan ahead if you plan on staying awhile.

The only part of the Cayos Cochinos island chain open to tourists, Cayos Grande is located within the world’s second largest coral reef, the Meso-American Barrier Reef. While only 24 miles away from the Honduras towns of Roatan or Utila, the entire island has remained pristine, thanks to limited tourism. In fact, only one resort is available in the island chain, and that is the 10 acre Turtle Bay Eco Resort, which features only eight cabins that can accommodate no more than 24 people total.

Maya Bay is a stunningly beautiful, sheltered bay on Thailand’s Koh Phi Phi. With a ring of white sand surrounded by mangroves and towering limestone walls blanketed by dense foliage, it’s easy to see why director Danny Boyle chose this beach for cult-favorite The Beach, starring Leonardo DiCaprio. The main beach within the bay is around 200 metres long with silky soft white sand, underwater colourful coral and exotic fish in exceptionally clear water. The whole bay is one big reef.

An underground beach sounds like the stuff of legend, but the Marietas Islands, where Hidden Beach lies, were used as a military testing ground by the Mexican government in the early 1900s, and it’s suspected that a bomb may have created the crater in which it sits. Access to this crescent within a gaping circular hole in the landscape, is by swimming or kayaking through a long tunnel. Many operators run boat trips here from Puerto Vallarta ($76 with ecotoursvallarta.com), but the sea is rough and you have to swim in beside treacherous rocks. But it’s stunning – Jacques Cousteau was a fan – with the bonus of possibly spotting a humpback whale on the way.