Categories Menu
Home » Advertized » A Celebration of the Culinary Arts: Best of the Best Dining Collaboration at The Apurva Kempinski Bali 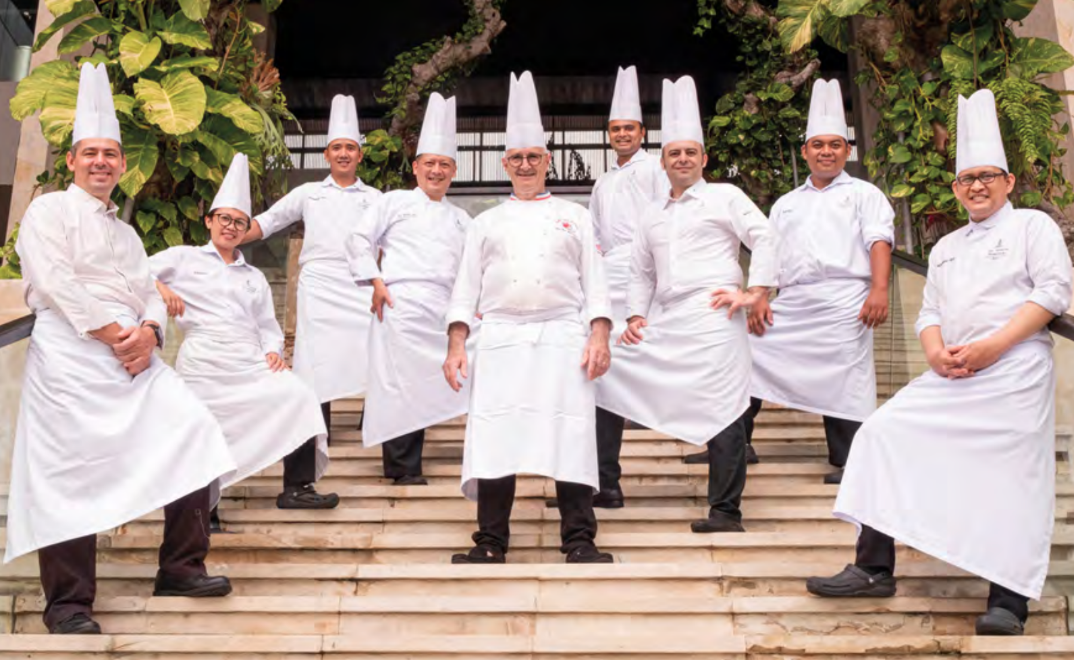 A Celebration of the Culinary Arts: Best of the Best Dining Collaboration at The Apurva Kempinski Bali

Chef Eric Cocollos, The Apurva Kempinski Bali’s director of culinary, and Meilleur Ouvrier de France Chef Jean-Yves Leuranguer have invited four esteemed professionals for a world-class culinary celebration. The series of events, which are going to be held from 14 July to 14 August 2022, will provide a stage for Michelin-starred chefs Chef Olivier Elzer, Chef Damian Piscioneri, Chef Marc Lahoreau and Chef Gaetan Fiard, all of whom were once a student of Chef JeanYves Leuranguer.

From a six-hands degustation dinner at Koral Restaurant and a fine omakase at Izakaya by OKU, to a special Brunchcation and afternoon-tea delight at Selasar Deli, the series of events will reunite the internationally acclaimed Chef Jean-Yves Leuranguer with his mentees.

July will see the renowned Chef Olivier Elzer and Chef Damian Piscioneri joining the resort’s chefs for a craftsmanship showcase. Named as one of the top 22 young chefs in France by the guide Gault Millau in 2007, Chef Olivier Elzer is a seasoned professional who has worked in two- and three-star Michelin restaurants and was awarded two Michelin stars at L’Envol Hong Kong. The Germany-born chef also founded the company Olivier Colony Limited, and co-founded O’chef lab. He also has his own modern French restaurant called Clarence, which presents a blend of French techniques and Asian cooking methods. Meanwhile, born in Cannes, Chef Damien Piscioneri is a distinguished pastry chef. With 25 years of pastry experience and artistic competitions under his belt, Chef Piscioneri has led the famous Café Pouchkine in Moscow and Paris and Caesars Palace in Las Vegas as Executive Pastry Chef. He has also worked in two- and three-Michelin-star restaurants, such as Pierre Gagnaire, La Rotonde and L’Oasis. Chef Piscioneri is also known for being the owner of the Damiano group, with the first establishment opened at the end of 2019 in the heart of the Montparnasse district.

In August, Chef Marc Lahoreau and Chef Gaetan Fiard will take centre stage. Chef Marc Lahoreau was born in Val de Loire. His experience includes an impressive resume of five-star hotels and resorts, such as Relais et Châteaux, and France’s Michelin-star restaurants. He has worked as Co Executive Chef at the new king’s palace Royal Mansour in Marrakech. Today, he is Co-Executive Chef and Trainer at the Paul Bocuse Institute. As the winner of World Champion of Sweet Arts in the 2014 International Confectionary Art Competition, Chef Gaetan Fiard is an esteemed figure in the pastry world. He is a competitor at heart, and his impressive accomplishments also include the Special Junior Prize at the European Sugar Art Trophy at Sirha. Chef Fiard has a wonderful career behind him. He was Executive Pastry Chef at the luxurious Terre Blanche Hotel Spa Golf Resort, and at the Michelin-starred Le Faventia. Chef Gaetan Fiard is also one of the mentees of Chef Jean-Yves Leuranguer.

“This is a truly special collaboration for us,” shared Culinary Director Chef Eric Cocollos. “It is a oncein-a-lifetime opportunity to bring together so many Michelin-starred background chefs in one place, and bring luxury international craftsmanship to Indonesia. We have prepared a culinary experience unlike any other, and we hope that all of the guests will be able to enjoy it as much as we love crafting it.”