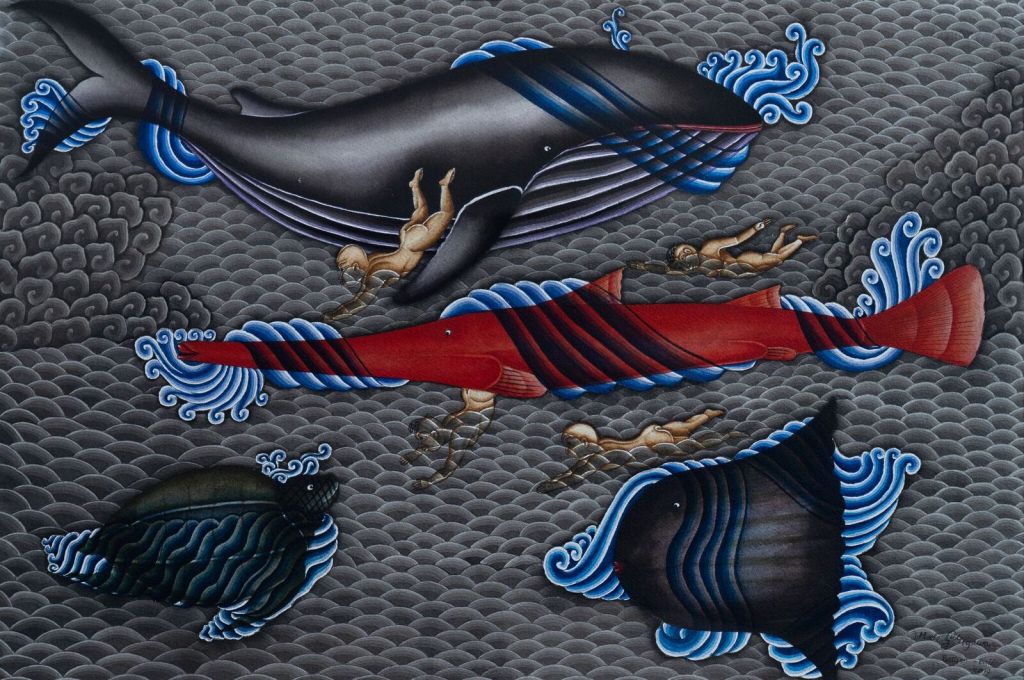 Gelombang: The Way of Waves

I MADE GRIYAWAN EXHIBITION AT JOHN HARDY BOUTIQUE & GALLERY AT SEMINYAK

Continuing the rich Batuan style, Balinese artist I Made Griyawan translates the religious narratives and local fables of his culture into breathtaking paintings that pulsate with life, and further evolving into the digital realm as Made’s art is turned into interactive video projections that enhance and play with the physical paintings – stepping into a world of imagination, steeped in Balinese myth and magic.

Is culture static or does it move and shift in waves?

Made Griyawan comes from a long line of Batuan artists, a cultural legacy that has given him a grounding in traditional techniques, which he now interweaves with contemporary themes and his own unique style.

Batuan art developed over the centuries, as artists from this village played witness to Bali’s ever-changing cultural and environmental landscape. Intricately detailed, layered scenes recorded the spiritual and everyday lives of the Balinese. The composition of Batuan paintings is based on the principal of Mamedeg – a pleasing arrangement – coming from the woven matting bedeg. This central concept of weaving scenes explains the sense of flatness found in Batuan paintings. The Wayang (traditional Indonesian shadow puppetry) screen, and a perspective of creating a bird’s eye or God’s eye view of looking down on the world have also influenced the style.

The Son of a famous Batuan artist Wayan Taweng (1926 – 2005), Made began drawing and painting from a young age. As a child, his curiosity led him to question the world around him, from the cycles of nature to the mystical Balinese world that lives beyond sight for most people.

After mastering the techniques of his forefathers, Made’s inquisitiveness led him to reimagine the Batuan style, introducing colors and concepts that spoke to the age he lives in. Hi work focuses on the duality of human beings – their greed but also their hope – the eternal battle we have within ourselves. As modern-day fables, Made’s storylines center around the masculine and feminine, dark and light, the natural world and more recently the impact we humans are having on the planet. He seamlessly merges the ancient with the modern, both through his symbology and his innovative use of media-mixing natural colors and acrylic with traditional ink and linework.

But breaking with tradition isn’t always easy and can even come down to something as simple as painting waves. When Made started to incorporate his now-signature waves into his work, traditionalists started to question whether this could be called the Batuan style. Made stayed true to his vision and kept creating the works that drew upon his heritage and his own voice. He is now recognized as one of the leading contemporary Batuan style artists, with his work gaining international and nation-wide attention.

Throughout his artistic journey Made has held onto his sense of curiosity – something he sees as coming naturally to the minds of children. One of his greatest pleasure is teaching at a school he started for the children of his village.

Made has breathed new life into the Batuan style and is now influencing the next generation of artists. He encourages his students to keep questioning where it is they have come from while reflecting the world they see around them.

Featured Artist: I Made Griyawan

Be a part of the Batuan experience and join our workshop with Made Griyawan via RSVP to your preferred venue:

February 22nd at the John Hardy Boutique & Gallery at Seminyak