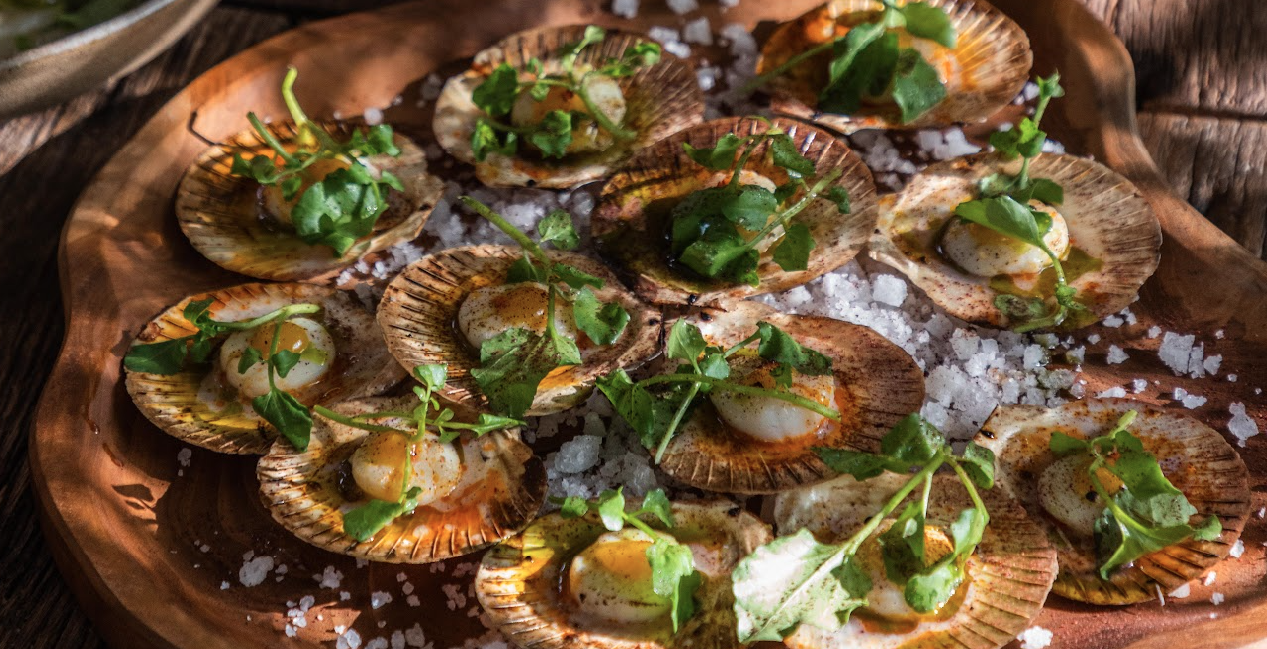 Pererenan Beach in Bali is known by locals and travellers alike – the volcanic sand beach is one of the best surf points on the Island. Yet, despite the proximity to Seminyak, Pererenan holds a more Balinese rural feeling, and the charming eateries along the area are all rustic and individualistic in their offerings.

Shelter in Pererenan is a project from Shelter Group, the partners behind the famous Shelter Café in Seminyak, who have joined forces with Chef Stephen Moore (UK). The goal was to create a restaurant with culinary offerings inspired by Middle Eastern and Mediterranean cuisine, merging both regions’ history, spices, smoky flavours, and homely recipes. The restaurant opened less than a year ago and has been an immediate success with the ex-pat and domestic community and has only further thrived since the borders of Indonesia reopened.

British-born Chef Stephen Moore has spent his career working all around the world in some of the world’s most renowned Michelin-starred restaurants, as well as the top hotels & resorts, including Aman Resorts. In addition, he spent time in various exotic locations, including Barcelona at 3 Michelin-starred El Raco de Can Fades, India & Sri Lanka. For a large part of his career working in Australia, Stephen cooked in some of the country’s most influential restaurants, starting at the Park Hyatt on Sydney Harbour, Rockpool, under iconic Australian Chef Neil Perry. Stephen then went on to work with Maurice Terzini at the renowned institution, Icebergs on Bondi beach. Finishing with his mentor, Ross Lusted, opening the two-hatted fine diner The Bridgeroom as Head Chef. Now, after working for ten years in Bali on various projects, Stephen leads the kitchen at Shelter Group.

Moore creates simple yet elegant dishes using artisanal cooking methods at the fire-front. Says Moore, “Cooking over an open fire is the most ancient and primitive of techniques – we use our wood-fired oven to smoke and burn rambutan and coffee wood. We also use an open charcoal grill and smoke with coffee wood.

Shared starter dishes include whipped chickpeas with oven-baked flatbread, which compliments the lamb kofta with mint yoghurt. The seared yellowfin tuna with wood-roasted mushrooms, pickled apple, and shimeji strikes a chord with its mix of textures and tastes. Or a show-stopping wood-roasted moon scallops with chilli, lemon butter, and sumac.

Shelter takes a laid-back and open architectural form using a Balinese-style ‘Joglo,’ which incorporates stone and recycled timber and then is adorned liberally with exotic plants. The owners shared that the island-inspired building “has been crafted to fit seamlessly into its surroundings, presenting a space that feels calm and in harmony with nature, a place constructed from the naturally occurring materials around it.” Illuminated by an opulence of candlelight throughout the evening, the atmosphere by night feels inherently cosy and intimate and implores patrons to continue drinking in the low-lit corners long after their meal is finished.

Embedded in The Shelter brand is the need for a “foundational human connection to nature and ingredients,” says one of the owners. “We want people to feel a sense of safety and Shelter, hence the name – it’s a place where you have everything you could want. The atmosphere is always lively; there’s always a buzz. It’s a warm place full of happy faces.“

Shelter is open from 12pm until late daily.

Lunch specials are offered from 12pm until 5pm while the full menu is available throughout the day.