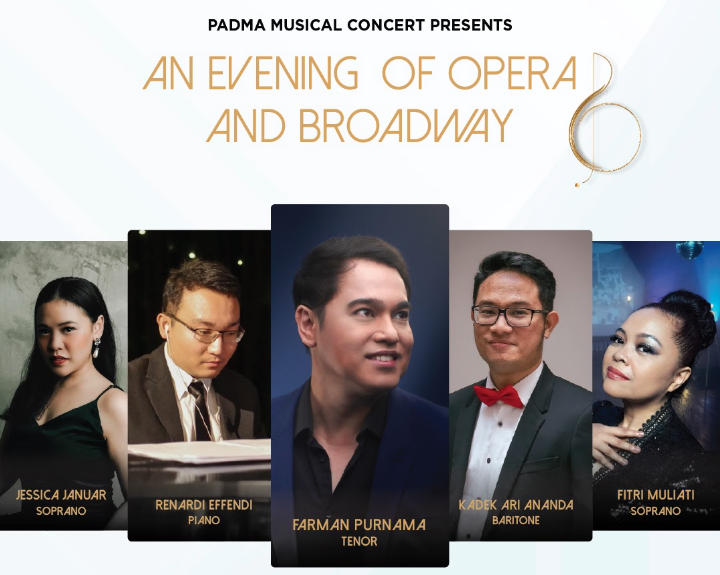 PADMA MUSICAL CONCERT PRESENTS AN EVENING OF OPERA AND BROADWAY

As part of the continuing series of musical events by Padma Musical Concert, four (4) outstanding professional voices and a renowned pianist will appear on stage at The Plumeria Grand Ballroom of Padma Resort Legian, for an exceptional evening of superlative live musical entertainment featuring the music of opera and Broadway on Friday, 2 September 2022, starting at 7PM.

Featuring a theatrical presentation format for the evening, the performers will open the evening with five selections from Giacomo Puccini’s epic opera “La Boheme.” Following a brief intermission, the ensemble will return to perform musical highlights from the international smash musical Les Misérables – the Cameron Mackintosh legendary production inspired by a novel by Victor Hugo.

This group of Indonesia’s very accomplished performers will appear in a unique evening of ensemble singing and musicianship, led by renowned tenor Farman Purnama, a graduate in classical vocal performance at Utrecht Conservatory in the Netherlands. He is a frequently featured soloist with the Batavia Madrigal Singers and The Jakarta Concert Orchestra. In possession of a superb voice and a compelling stage presence, Purnama has won high praise for performing as Don José in Bizet’s CARMEN (Jakarta Concert Opera); Ferrando in Mozart’s Cosi Fan Tutte (Dutch National Opera Academy), Aeneas in Henry Purcell’s Dido and Aeneas, Turiddu in Mascagni’s Cavalleria Rusticana, and Samson in Saint-Saëns Samson and Delilah.

Completing the talented ensemble appearing on 2 September 2022 in the Padma Presents are:

Fitri Muliati – a soprano who works as a vocal coach at the Resonanz Music Studio in Jakarta. She has collaborated with some of Indonesia’s leading composers and performed in recitals featuring music from Anna Bolena, Cosi Fan Tutte, and Il Trovatore.

Jessica Januar – a soprano trained at the Guildhall School of Music and Drama in the UK, studying classical voice. She has appeared internationally in both musical dramas and opera productions.

Kadek Ari Ananda – an award-winning baritone based in Jakarta.

Renardi Effendi – pianist and experienced music director and graduate in musical composition from Universitas Pelita Harapan. He is a highly skilled professional with proven mettle in piano compositions who works as a songwriter and chamber music accompanist.

The ticket price for this event is IDR 500,000 nett/ person. Tickets purchased with a BCA credit card are eligible for a 20% discount.